Sefton Active Travel and Cycling UK Cycling Development Officer has been working with excluded pupils from Savio Salesian College in Bootle, to teach bicycle maintenance as a diversionary activity to struggling students.

The students who are are finding it difficult to be part of mainstream education and are part of the Pupil Referral Unit within Savio took part in a 6 week bike maintenance course, providing them with practical skills and knowledge to assist them with their re inclusion back into the classroom environment. 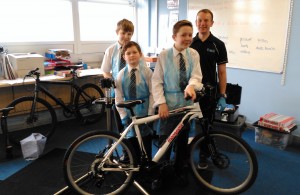 The bikes had been kindly donated to the school by Merseyside Police, through their stolen recovered programme, providing bikes that had either been used in criminal behavior, seized as proceeds of crime or recovered and not claimed by the owner.

There was a good mixture of bikes, enabling the students to work on a varied array of components and styles. Originally the school hadn’t decided on what would be done with the bikes once the maintenance was complete and the bikes were back in a serviceable condition. Active Travel supports a Community Cycle Club in Southport ‘Tyred Rides‘ (part of Parenting 2000), so it was suggested that the bikes be donated to them, which in turn would circulate the bikes back into the community. Our Cycling Development Officer, who is a ride leader along with a qualified mechanic, suggested as an extra challenge, that the students and teachers, rode the bikes to Tyred Rides to make the donation in person.

So at the culmination of the programme, we embarked on the 20 mile ride from Litherland to Southport, where we were greeted with refreshments and a warm welcome from the staff at Tyred Rides and a photographer from the local free paper. Once fully refreshed and photos taken, it was on to the mini bus for the well earned ride back to Litherland and the end of a fantastic achievement. 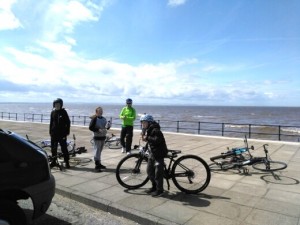 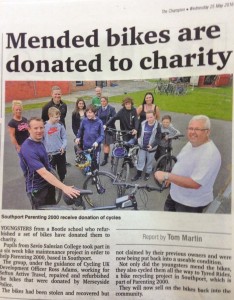 Off the back of the success working with the Pupil Referral Unit Students, the Teachers supporting the Duke of Edinburgh pupils inquired about a similar programme for them. We are now part way through this programme, a blog account will be ready to read and enjoy in a few days.

The excluded pupils were then invited to take part in a ITV local news interview, highlighting the bike maintenance/recycling programme they have been part of.

Tyred Rides is a bike recycling project that exists as an extension of the good work that Parenting 2000 conduct. It accepts unwanted bikes from their community and then sells these for a nominal fee, in order for themselves to break even, and give back to the public for continued use for journeys and leisure.

About the author: Ross Adams